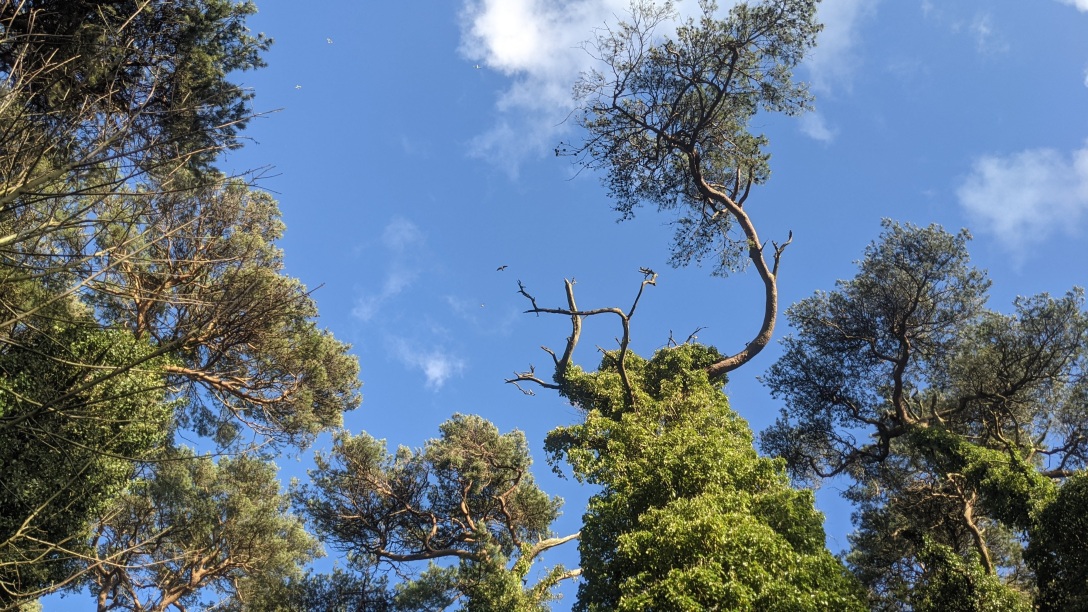 There’ve been days when we were fooled… e.g. a hazy Friday in January when we could *feel the warmth of the sun on our skin*, an experience our skin seems to forget every winter. But we knew it was an anomaly. A lovely freak occurrence. Then there are days like today, when our vitamin D receptors are again sated, but something’s different. It’s different – the earth has turned, the season shifted. Spring is now.

The clincher, I suppose, was last Monday. The sun was out and no one could stop us, so my wife and I reinstated our Monday Escapades, taking a super-local outing to a nature reserve we’d only driven past before. If I tell you that Labrador Bay is an RSPB site, maybe you can guess I was excited. Grabbed some lunch and binoculars: ready to twitch.

When you go through the gate into the reserve, what hits you is its topography. It’s as if the land is trying to tip you into the sea – no sheer drops, just wide green planes that descend very decisively, showing neither fence nor hedge but just… English channel. I was distracted, though. Labrador Bay was “Purchased to help secure the future of the cirl bunting, a rare bird whose population is almost entirely restricted to south Devon” and like good nerds, we’d listened in the car to an soundfile of its call. Right on cue, like a welcome wagon, the call rang out across the plain (a brisk run of chirps, grasshopper-ish overtones) and we tracked down a cirl in the top of a hedgerow. There was no mistaking his yellow face stripes. He arched his wing-feathers out, maybe cooling himself in the unfamiliar heat. You’re probably less thrilled than I am about him, about the crew of thirtyish linnets gabbling in treetops, the woodpecker, peregrine falcon and the song of a skylark. But they made me feel more alive.

Over the coming weeks I’ll be sharing the stories behind some dear darling songs, the elements of my new album FLORA & FAUNA. On Instagram I’ll be doing mini-versions of these, more like snapshots, with a li’l illustration for each track (why not).

The album opener is ‘Kingfishers Catch Fire’, a song I’ve been trying to harness for years. Though it got a 2020 update, the lyric was mostly written in 2014, whirling out of me with caffeinated ease in a single session, upstairs in an Oxford coffee shop. The lyric hoovered up the experiences of my previous life, not so much trying to marshal them into a pleasing narrative, but in search of a thread that actually existed behind everything. You might notice a debt in the title to a poem by Gerard Manley Hopkins, whose belief that nature is charged with supernatural grandeur resonates in the animism that animates much modern-day creative work, e.g. that of Bjork. I love Gerard and Bjork, and the conviction that most of what exists is vibrating with *being*. I think in each thing’s identity there’s a kinda soup of being and purpose… one concept the noun, the other like a verb. Anyway before I add too big a spoonful of pretension, I’ll say that this song tells of my world getting bigger, via encounters with the creatures in the GMH poem.

The River Braid flows through my home town of Ballymena right down into Lough Neagh, and I used to walk along its banks when I needed to clear my head. One such time years ago, in my youth, I was asking big questions about where to spend my time & whether to take an opportunity overseas, outside the small diameter of my life. Why venture beyond? This question wasn’t just rhetorical. I was asking it of friends, mulling it over as I went on walks outside human counsel. Here as I reached the murky water’s edge, suddenly there was a flash of blue – for the first time ever, I saw a pair of kingfishers. Electric blue ‘cause the late-spring sun was out. And they were moving fast, but if I ran I could prolong the experience. So I did, & eventually found myself in the overgrown banks, far from the path. Knee-deep, somewhere I’d never been, because there’d been something worth seeing. So this song is about going where you’ve never been, because of something worth following.

Sprinting for a sighting
till I couldn’t anymore, and I knew

That the track untravelled
was the one I’d take to look for you.

It’s not like I’d never left home before – the previous summer, I went inter-railing through Europe with a couple of friends. Only our start- and end-points were decided, so there was plenty opportunity for lingering if we liked somewhere, missing out entire countries… or just not knowing where to sleep. One such occasion, we’d just got into Italy in search of a campsite by Lake Como, and no combination of transport & guidebook could get us there. Somehow we got within sight of the lake, asked an old Italian guy where to go and instead of giving directions, he decided to walk in front of us for a couple of miles (abiding mental image: tanned, white-haired man, the back of his bright yellow trousers, and he’s moving slowly towards… well, that’s a matter of trust). We arrived in the end and pitched a tent, and he accepted a drink as thanks. We saw plenty that summer, but *being* without *purpose* maybe..?

Even on a trip out of Munich to Dachau, were we driven by purpose? Did we go to acknowledge something, to understand what can be done in the name of *purpose* at its most evil? Of course, a concentration camp was built in that city – such thorough cruelty, such an obscene waste of life. The site is necessarily a memorial now, and original buildings remain. But new places of worship coexist there: the Jewish memorial, door handles wrought as olive branches, leads underground into the depths; a Catholic chapel takes care to obliterate the right-angled monotony of Nazi aesthetics with its curved walls. Through the garden, as I viewed it, flew a pair of dragonflies, again catching the sun and painting indelible electric blue on my memory.

When you discover something worth following, even your previous dead ends make a kind of sense in its taillights. So it is with ‘Kingfishers’, which didn’t get made in 2016 when I thought it would, or get made with friends in 2020 as planned. It’s a persistent little thing, flying true to the course of its own river.

Couldn’t get my friend Jesse to play mandolin (we were due to meet within weeks of lockdown), so I learned to play acoustic guitar a little better. I wanted to acknowledge years had passed since that first flash of blue, so added a new intro that recast the body of the lyric as a series of journal entries. The percussion loop that propped up the first half of the song was quite obviously a loop, sounding a bit too off-the-shelf, so I made my own version from the sounds of gravel crunching, twigs snapping and a dash of tambourine! And the “catching my breath” section, where the harmony changes – it needed a boost of some kind. I asked violinist Joanna Karselis, also a film composer whom I know through Sputnik, to help give it lift. Studio Ghibli films had been helping me through lockdown 1, so Joe Hisaishi’s scores were influencing mine… but Jo gave them breath and life. The only element from my original, happy (pre-Brexit vote) demo that’s survived is the synth solo near the end. MicroKorg XL, in case you’re wondering, and I liked the improvised quality and the timbre that sounds vaguely like a cor anglais. You could say it (sweet, piping, metallic) represents the kingfisher, but that’d be finding connections after the fact. When I played it it wasn’t with a grand plan, but a liking for the being, the *thing-ness* of a waveform, some notes. The sound was good.

Bow swung finds tongue to fling out broad its name;

Each mortal thing does one thing and the same:

Deals out that being indoors each one dwells;

Selves — goes itself; myself it speaks and spells,

Crying What I do is me: for that I came.